December 15, 1875, Emilio Jacinto was born in Trozo, Manila. Even as children, Emilio Jacinto and Andres Bonifacio were close as he was nursed by Andres Bonifacio’s mother. At a young age Emilio learned to speak Spanish but this did not hinder his fluency in the Tagalog Language. Due to poverty, he often dressed in used clothing which were not taken out of hock, making him the subject of many jokes. Despite of hard living, Emilio studied very hard and was well educated. He finished primary education in a private school and obtained a bachelor of arts in Colegio de San Juan de Letran.

The Mind that Guided the Revolution

He was studying law in the University of Santo Tomas in 1894 when he joined the Katipunan at the age of 19. He took the Katipunan alias of ‘Pingkian’, which means ‘To Strike’ (like you do with a bolo). He became Bonifacio’s closest advisor, and oversaw the financial affairs of the Katipunan. When Bonifacio and Jacinto drafted separate moral codes which would guide the actions of the revolutionaries, Bonifacio acknowledged Jacinto’s intellect and chose the younger jacinto’s draft for publication in the Kartilya. The code of conduct showed that a good heart, and love are needed in order to relieve the suffering of the Filipino people; the true meaning of freedom.

Emilio Jacinto became the editor of Kalayaan, the Katipunan’s newspaper. After the first publication, the membership of the Katipunan rose from 300 to 3,000 members! The effectiveness of the  Kalayaan  is attributable to its use of concepts and colloquialisms familiar to the people. In one article, Jacinto wrote the parable of a beautiful woman appearing before a child in tears. The child asked the woman who she was, and she replied “Because of my desire, the people have united and have foregone their self-interest only to set their sights on the good of all. My name is FREEDOM”. Under the nom de guerre Dimas-Ilaw, Jacinto wrote the narrative “Liwanag at Dilim” (Light and Dark) and the poem “a la Patria”. 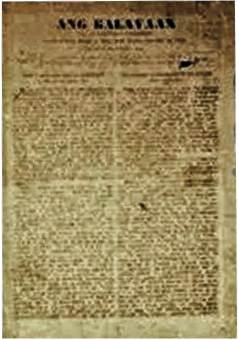 The Rise of the Katipunan

When the revolution broke in 1896, Andres Bonifacio and Emilio Jacinto led the siege of Polvorin, San Juan Del Monte also known as the Battle of Pinaglabanan. He also planned and disguised himself in order to help Dr. Jose Rizal escape, which later declined. Supremo Andres Bonifacio, at that time is the president of the “Haring Bayan” (Great nation), named Jacinto as the commander of the Revolution’s Northern Forces.

Despite of Andres Bonifacio’s unjust arrest and execution, Jacinto and the rest of the Katipunan continued to wage battle with the Spaniards in Maimpis, Magdalena, Laguna in Feb. 1898, Emilio was wounded and caught. In the convent in Magdalena, he was repeatedly thrown of a staircase, and it is believed that his blood stains the wooden staircase to this day. He tricked his captors and was able to escape. Following these events, the historian Augusto de Viana wrote that Jacinto became a meat vendor, and the Bantanguenyo General, Migule Malvar was one of his meat suppliers. Emilio Jacinto died of malaria at age 23 on April 16, 1899 in Santa Cruz, Laguna. He may have also left a pregnant lover, Catalina De Jesus. Though he was young, Pingkian played a gigantic role guiding the revolution and founding of the Philippine Nation.

> Check out some Emilio Jacinto products.