Bayani Art team produced this art project titled KASAYSAYAN. translated to “History.” in collaboration with Kristian Kabuay of Baybayin.com. Through this piece, Bayani Art wanted to emphasize the struggles, contributions and triumphs of the FilAm community. In the center of the mural is Gabriela Silang, Jose Rizal, Andres Bonifacio, LapuLapu and Sultan Kudarat. These courageous leaders played a key part of the Philippines history. We centered these heroes to not only recognize Filipino American history, but to also acknowledge our roots.

On the bottom left side of the mural stands the Filipino veterans fighting alongside the Americans during World War II. Right above that we can see the Manongs, students, community organizers, and activists who came together in solidarity to fight against the demolishment of the International Hotel in the 1960’s. The faces on top of the I-Hotel are the students who played a crucial part in this movement. On the left side of Jose Rizal stands LapuLapu, the man who led the Filipinos victorious in the 1521 Victory at Mactan.

Larry Itliong is displayed on the top right side of the mural, alongside Philip Vera Cruz and other Filipino and Mexican farmworkers. Bayani Art wants to acknowledge the contributions that Filipinos made during the farmworkers movement as it is often a forgotten and untold story. On the left of the farmworkers stands a Filipino boxer – which represents that attributions Filipinos have made in American sports. Located on the right of Andres Bonifacio is Sultan Kudarat, a man who successfully defended Mindanao during Spanish Colonization. Lastly, the Katipunan is also displayed in the lower half of the red section through the Cry of Caloocan and Katipunan blood pact.

We wanted this art mural to showcase that resiliency and kapwa lies in the blood of Filipinos. We hope that this piece encourages the people to not only learn about their history, but to also fight against injustices happening today. Mabuhay. 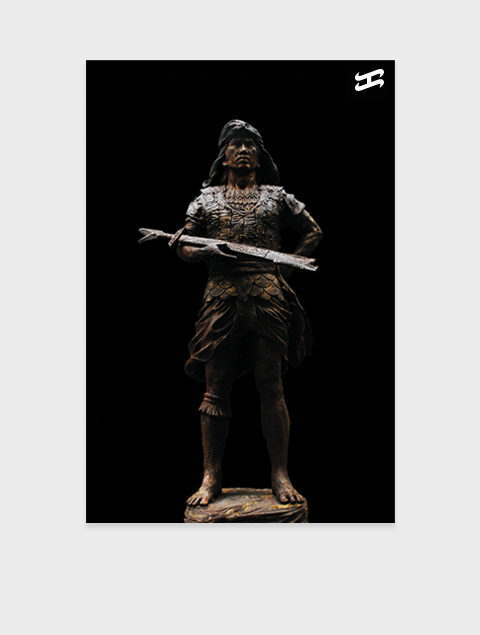 The Filipino farm workers started to organize several actions and protests in response to the mistreatment of the Mexican and Filipino migrant workers. One of their most famous protests being the Delano Grape Strike. Alongside Cesar Chavez, Dolores Huerta, Philip Vera Cruz, Larry Itliong was able to lead thousands of workers in successful protests, such as the 300 mile strike from Delano to Sacramento.

Katipunan, officially known as the Kataastaasan Kagalanggalang na Katipunan ng mga Anak ng Bayan or the KKK, was an organization founded on 7 July 1892 by Andres Bonifacio, Ladislao Diwa, Teodoro Plata and a few others, with the vision of completely separating the Philippines from Spain after declaring the country’s independence.
Learn more about Andres Bonifacio

Procedes from the sales of the “Ang Katipunan” prints will go towards the Cartwheel foundation.www.cartwheelfoundation.org “Cartwheel seeks to give indigenous youth and communities the chance to enjoy their right to quality and culturally relevant education.” 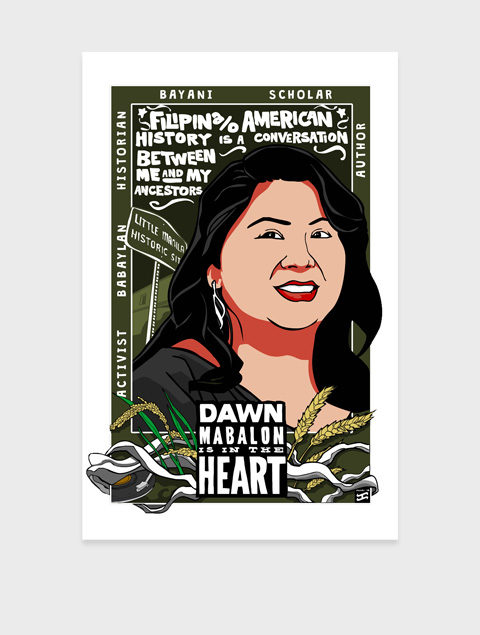 All Procedes from the sales of the Dawn shirts will go towards [email protected] Educational Partnerships (PEP).

Gabriela Silang (March 19, 1731 – September 20, 1763) earned the title “Henerala” as the first Filipina woman to lead a revolt during the Spanish colonization of the Philippines. Her courageous leadership became a symbol for the importance of women in Filipino society, and their struggle for liberation during colonization.

Art print from the book Gabriela Silang. The children’s book story takes place in the Philippines and follows the life of Gabriela Silang. The book narrates Gabriela’s emergence to becoming a leader for her people after the devastating loss of her husband, Diego Silang.